CHC in the Press: How CHC Is Leading an Emotional Recovery for Silicon Valley Families

CHC has been a hub for resources for youth mental health, learning differences, ADHD, anxiety, depression and autism. The year 2023 will mark 70 years since Peninsula-based pediatrician Dr. Esther B. Clark founded Children’s Health Council as “a place where kids come first,” with its clinical services, community clinic and the Sand Hill School and Esther B. Clark Schools. Numerous points of connection, including a podcast, blog, workshops, resource library and now, telehealth access, have expanded greatly over the last year to meet increased demand. 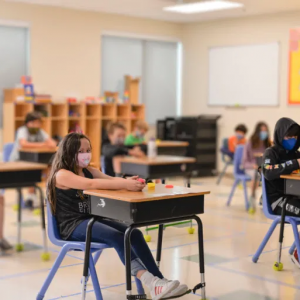 After a year without recess, team sports or independent young adults off at college, the reality of the individual needs that can arise among the broader circumstances hits close to home for two CHC board members in the community, Catherine Harvey and Perri Guthrie.

For Harvey, Guthrie, and the local community at large, a real conversation around mental health in Silicon Valley got underway in a meaningful way in 2016, amid a surge in teen suicides in Palo Alto that made national headlines.

“We decided to pull together as many like-minded folks as we could to have a conversation about what was happening [with youth suicide],” says CHC Director of Marketing and Communications Micaelia Randolph, Ed.D.  The agency focused on providing additional therapy, education, public awareness and collaboration. The resulting Leadership Collaborative for Teen Mental Health is a unified effort among local youth ment health agencies. Its 120 member organizations include Challenge Success, the Division of Child and Adolescent Psychiatry at Stanford, SafeSpace, the Sand Hill Foundation and Sequoia Union High School District.

Teenagers were especially vocal during these earnest conversations, which led to the formation in 2017 of the Teen Wellness Committee, composed of teen mental health advocates from 17 Bay Area high schools.  (Now housed at SafeSpace in Menlo Park, the committee remains active.)

CHC also started RISE, its comprehensive DBT (dialectical behavior therapy) intensive outpatient program for teens (a partnership with Stanford Children’s Health), which Randolph points out was one of the first of its kind on the Peninsula and continues to fill a gap for those ages 13–18 who may need more than therapy can provide, but don’t require hospitalization.

This open and prepared focus on mental health primed CHC to meet the demand presented by the stressors of the pandemic as well as an escalation in need prior to it. “We recognized immediately that this was going to have a long emotional tail on it,” Randolph says. “Not only people getting sick physically, but all of the things around the isolation: kids missing milestones, parents being at home with distance learning. We decided we were going to put ourselves in a spot to help lead the emotional recovery forward. That was the lane we were going to take.” And this is precisely what CHC has done with its effort Leading the Emotional Recovery, which has included pivoting to telehealth clinical services, setting up its schools with distance learning, communicating regularly through social media, steering community education and adding a section on COVID-19 to its robust online resource library (resources are accessible for families whether or not they use CHC’s clinical services).

“Some organizations were struggling to connect the dots and stay open,” Guthrie recalls of the early days of the pandemic. “CHC was really working on overdrive to reach more people. And how to be there for the families and individuals that were in need. There was an immediate escalation of services that way. Telehealth really broadens our reach in ways we couldn’t even imagine before.”

CHC’s expanded capacity has been bolstered by a recent grant of nearly $2.6 million from Jack Dorsey’s Start Small Foundation.

While a high-achieving environment like Silicon Valley presents myriad pressures, it is also a place of compassion, introspection and receptiveness to change.

Excerpted from “KIDS FIRST: How CHC Is Leading an Emotional Recovery for Silicon Valley Families” in the Nob Hill Gazette. Read the full article online.