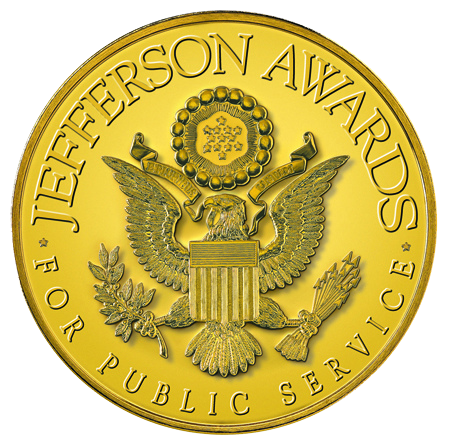 Founder of the mental health nonprofit TeenzTalk, Nadia Ghaffari, was recently awarded a Bay Area Jefferson Award for “bringing hope and help to young people with mental health conditions.”  Jefferson Awards are given in recognition of exceptional public service and contribution to the community. The following is an excerpt from Nadia Ghaffari’s award announcement on local CBS News station KPIX:

A Los Altos teenager discovered how serious the problem is when she encountered a real life crisis: she stepped in to prevent a friend from taking her own life. Then she set out to bring hope to teenagers worldwide.

“My friend was living with depression and her parents did not know,” Ghaffari said. “She was silently suffering to a point where she attempted suicide, and I had to intervene to get her professional help.”

Soon after, Ghaffari founded the mental health nonprofit, TeenzTalk, to help others. That was in 2016. She was a junior at Los Altos High School. Two years later, her TeenzTalk website gets more than 2,000 visitors a week.

Young volunteers across the globe tell their stories on video and share resources for help.

“The stories are really meant to show young people at large that they’re not alone,” explained Ghaffari.

This year’s event was held at Google’s Sunnyvale campus and sponsored by community organizations like Lucile Packard Children’s Hospital and the Mental Health Services Oversight and Accountability Commission of California.

Ghaffari serves on various community advisory boards and committees, like the Stanford Center for Youth Mental Health and Well Being. She has also won several local and national awards for her work in teen mental health awareness.

She plans to earn degrees in psychology and law and enter the mental health field. Even though she’s now a Cal Berkeley freshman, Ghaffari still runs TeenzTalk. In fact, she’s expanding its message to college students and young adults.

“I just hope some of these actions will help someone,” she explained.