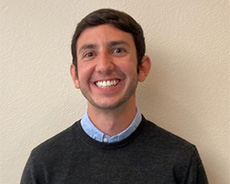 Jason Tinero is a Doctoral Intern in Clinical Psychology who specializes in therapy and assessments with children, adolescents and families with medical illnesses, depression, anxiety, minority sexual and gender identities and grief/bereavement. Jason graduated with honors from Washington University in St. Louis with a BA in Anthropology and Philosophy-Neuroscience-Psychology. He then went on to earn his MS in Narrative Medicine at Columbia University, where he conducted research on grief and bereavement among clinicians in the NICU. He is in his fifth and final year at the PGSP-Stanford PsyD Consortium, where he has earned his MS in Clinical Psychology and will earn his PsyD in June 2022. Throughout graduate school, he has received extensive training in neuropsychological assessment and therapeutic modalities such as Cognitive-Behavioral Therapy (CBT) for youth and families. His doctoral research focuses on youth and families dealing with medical conditions, such as identity development for adolescents with cancer or creating a trauma-informed intervention for parents of youth with Pediatric Acute-Onset Neuropsychiatric Syndrome (PANS). His approach to treatment utilizes the genuine therapeutic relationship as a foundation for change, and it is based upon warmth, compassion and empathy. In his free time, Jason enjoys hiking, cooking, trying new foods, watching comedy television shows and exploring the Bay Area.