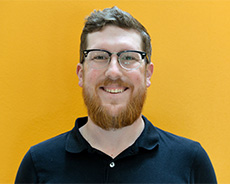 Stephen Kieninger is a Classroom Assistant at the Esther B. Clark School and has been working with children for many years. Stephen taught English as a Second Language to adults and teens in Italy for three years, during which he also worked as a private tutor, teaching English to children. Upon returning to the United States, he worked as a Behavior Technician for almost two years before joining the staff at Esther B. Clark.

Stephen is an avid poet and musician who loves using his talents to encourage students to pursue their own passions. He and his wife, Giulia, have a severe case of wanderlust and enjoy exploring all the particularities that make our wonderful world so unique. On Sundays, Stephen is also a radio disc jockey who can be found surfing the airwaves at KFJC 89.7fm.