49ers’ Solomon Thomas Passionate in His Fight for Suicide Prevention 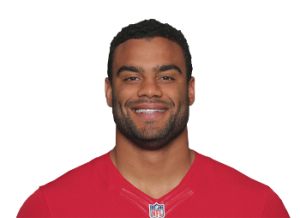 In May 2019 at its annual Lifesavers Gala, the American Foundation for Suicide Prevention gave 49er Solomon Thomas and his parents the Survivors of Loss Award, an honor in recognition of those who have shared their stories in an effort to help others, advance prevention initiatives and create change.

“To be strong means to be vulnerable, willing to be uncomfortable, grow in the hardest times of your life and be confident in your emotions,” Thomas said in his speech that night. “This is the biggest honor I’ve ever received. I love you all.”

For the Thomas family, the nearly year-and-a-half journey from Ella’s death to that New York City podium was filled with heart-wrenching grief. What followed was what Moutier describes as a “mishmash” experience in which the stages of grief can’t be put into an easily defined structure.

Mixed in that grieving process is a natural instinct to question everything that happened leading up to the suicide. What could they have done differently? Were there missed signs? How could they have helped?

A little less than five months after Ella’s death, the 49ers helped connect the Thomas family and the AFSP. On June 2, 2018, the Thomases participated in the Out of the Darkness Overnight walk, one of the AFSP’s signature suicide prevention events.

As the Thomases learned more about the stigma that can be associated with mental health and suicide, they decided they wanted to speak about their loss as openly as possible.

“We realized now that we live in a different, new world,” Chris Thomas said. “The previous one was shattered, but we know that we can now try to pick up the pieces and do the best we can to help ourselves and help others. One of the things we find is that doing things like with the AFSP and other organizations, it’s almost therapeutic.”

Those opportunities to stand with others who have dealt with similar loss ignited something in Solomon Thomas, who said he had to find out who he was again after Ella’s death. That meant plenty of time spent with his parents, friends and therapists capable of helping him sort through his feelings.

Thomas’ trips to therapy also meant being open with his emotions and seeking what he called a “new outlook on life.” He discovered that things won’t get easier but that there is a way to adjust and keep moving. Thomas wasn’t set on rediscovering his old self as much as discovering the new Solomon Thomas.

What he found was someone who wanted to take unspeakable tragedy and make it comfortably speakable.

Excerpted from “49ers’ Solomon Thomas passionate in his fight for suicide prevention” on ESPN.com. Read the full article.

American Foundation for Suicide Prevention raises awareness, funds scientific research and provides resources and aid to those affected by suicide. Learn more about AFSP and their work.