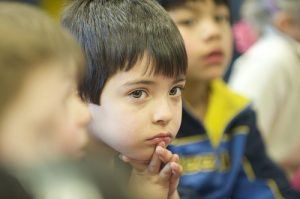 Spending on special education students in California has increased by just over 20 percent over the past decade — from $10.8 billion to $13 billion in inflation-adjusted figures, according to a new report.

That’s just one of the startling figures in the report from the Legislative Analyst’s Office that provides a detailed overview of California’s special education system, which now serves some 800,000 students with physical, cognitive and learning disabilities.

They make up about 1 in 8 of California’s public school students.

Despite the massive investment, special education students lag behind almost all other student groups on a range of measures, such as average test scores and graduation rates. They also are suspended from school and are chronically absent — which means absent from school for 10 percent or more of the instructional year — at higher rates.

The report comes against a backdrop of concerns among state leaders that the special education has not undergone much-needed reforms in areas compared to other parts of the education system.

As part of the budget legislation approved earlier this year (now part of the California Education Code), in order for certain state funds to be allocated for special education next year, the Legislature will be required to come up with a number of reforms ”to improve the academic outcomes of individuals with exceptional needs.”

Excerpted from “California Spending Over $13 Billion Annually on Special Education” in EdSource. Read the full article.

EdSource works to engage Californians on key education challenges with the goal of enhancing learning success. It does so by providing timely, useful and accurate information to key education stakeholders and the larger public; advancing awareness of major education initiatives being implemented in California and nationally; and highlighting effective models and strategies intended to improve student outcomes, as well as identifying areas that are in need of repair or reform.