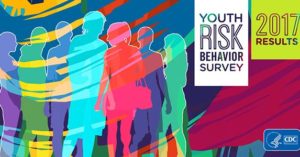 The Youth Risk Behavior Surveillance System (YRBSS) monitors six categories of health-related behaviors that contribute to the leading causes of death and disability among youth and adults, including—

YRBSS also measures the prevalence of obesity and asthma and other health-related behaviors plus sexual identity and sex of sexual contacts.

The YRBS Data Summary and Trends Report uses YRBS data to focus on four priority areas closely linked to HIV and STD risk including sexual behavior, high-risk substance use, violence victimization, and mental health over the past decade.

Results from the 2017 YRBS show that fewer U.S. high school students are having sex and using select illicit drugs; however, far too many students remain at risk for HIV, STDs, and teen pregnancy.

Unfortunately, condom use among sexually active students decreased from 62 percent in 2007 to 54 percent in 2017, presenting a serious health risk for STD infections (including HIV). This decline follows a period of increased condom use throughout the 1990s and early 2000s.

While the percentage of students who reported using select illicit drugs (defined as cocaine, heroin, methamphetamines, inhalants, hallucinogens, or ecstasy) was down from 23 percent in 2007 to 14 percent in 2017, the survey also found that nearly 1 in 7 U.S. high school students reported misusing prescription opioids – a behavior that can lead to future injection drug use and increased risk for HIV.

Research shows experiences of violence and poor mental health can compound risks for STDs, including HIV. Nearly 1 in 5 students were bullied at school, and more than 1 in 10 female students and 1 in 28 male students report having been physically forced to have sex. The proportion of students who persistently felt sad or hopeless increased from 29 percent in 2007 to 32 percent in 2017.

Many high school students thrive during adolescence; however, stigma, discrimination, and other factors put some youth at an increased risk for negative health and life outcomes. The 2017 YRBS highlights health disparities that exist among students based on sex, race/ethnicity, and sexual identity.

For the second time, the 2017 YRBS provided national data on sexual minority youth (SMY). This includes students who identify as gay, lesbian, or bisexual; are not sure of their sexual identity; or who report sexual contact with persons of the same sex. YRBS findings reveal SMY experience significantly higher levels of violence in school, bullying and sexual violence and  face incredibly high risks for suicide, depression, substance use, and poor academic performance. For SMY to thrive in their schools and communities, they need to feel socially, emotionally, and physically safe and supported.

CDC’s YRBSS is the nation’s largest surveillance system designed to monitor health behaviors and experiences among high school students throughout the United States. Every other year a representative sample of students at the national, state, and local levels complete the YRBS.

The 2017 YRBS results are now available on the YRBS Website. Available materials include —