Cops and No Counselors: How the Lack of School Mental Health Staff is Harming Students [downloadable] 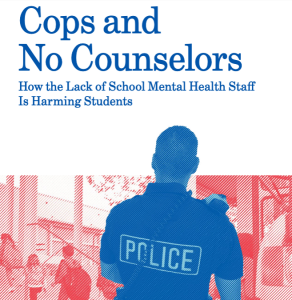 Today’s school children are experiencing record levels of depression and anxiety, alongside multiple forms of trauma.

According to the Centers for Disease Control and Prevention, the suicide rate among children ages 10 to 17 increased by 70 percent between 2006 and 2016. Approximately 72 percent of children in the United States will have experienced at least one major stressful event—such as witnessing violence, experiencing abuse, or experiencing the loss of a loved one—before the age of 18.

School counselors, nurses, social workers, and psychologists are frequently the first to see children who are sick, stressed, traumatized, may act out, or may hurt themselves or others. This is especially true in low-income districts where other resources are scarce. Students are 21 times more likely to visit school-based health centers for treatment than anywhere else. Schools that employ more school-based mental health providers see improved attendance rates, lower rates of suspension and other disciplinary incidents, expulsion, improved academic achievement and career preparation, and improved graduation rates.

Data shows that school staff who provide health and mental health services to our children not only improve the health outcomes for those students, but also improve school safety. However, there is no evidence that police in schools improve school safety—indeed, in many cases they are causing harm. When in schools, police  do what they are trained to do—detain, handcuff, and arrest. This leads to greater student alienation and a poorer school climate.

Given this information, we would expect school boards, school principals, and government leaders to be working to remove law enforcement from our schools and using every available resource to build up school-based health professionals. But that has not been the trend. Instead, funding for police in schools has been on the rise, while our public schools face a critical shortage of counselors, nurses, psychologists, and social workers. As this report reveals, millions of students are in schools with law enforcement but no support staff:

The report reveals that schools fortunate enough to have mental health professionals are still grossly understaffed. Professional standards recommend at least one counselor and one social worker for every 250 students, and at least one nurse and one psychologist for every 750 students and every 700 students respectively. These staffing recommendations reflect a minimum requirement. Nonetheless, 90 percent of students in public schools fail to meet this standard when supporting students. Even in schools with a significant lack of health support staff, law enforcement presence is flourishing. Many states reported 2-3 times as many police officers in schools than social workers. Additionally, five states reported more police officers in schools than nurses.

The consequences for these funding decisions fall on the most vulnerable students. Teachers are often not equipped to deal with the special needs posed by children with disabilities. Furthermore, historically marginalized students, such as students of color, may attend schools with fewer resources and supports.

When there are no other behavioral resources at hand, some teachers request help from law enforcement. This results in an increased criminalization of our youth: we found that schools with police reported 3.5 times as many arrests as schools without police. As a result, students with disabilities and students of color are most frequently criminalized.

This report presents detailed results, state by state. It outlines which states have the least support staff and greatest police presence. In addition, it puts this data in context by reviewing the history of how we got here. Lastly, it presents key recommendations to reverse course.

The data source for this report is the U.S. Department of Education, 2015-2016 Civil Rights Data Collection (CRDC). For more information on this topic, download  Cops and No Counselors: How the Lack of School Mental Health Staff is Harming Students from the ACLU webite.