In a San Francisco High School, the Scars of Remote Schooling Linger 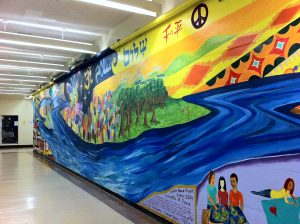 The damage wrought by over 18 months away from classrooms lingers at Burton, a high-poverty school in a high-wealth city, overlooking the whole of San Francisco from a hilly peak in the southeast corner of the city. Burton — the students who rely on it and the teachers who power it — is a study both in joy and in enduring trauma, a place where everything seems normal, but nothing is quite as it should be.

It’s a transition underway all over the country this fall, but especially in urban school districts, such as San Francisco’s, that barely reopened for in-person classes last school year. In an ironic twist of the pandemic, students like Am’Brianna, who arguably need school the most, got the least of it. Now they are trying to recover.

At Burton, there aren’t enough teachers or substitutes, so teachers are forced to cover classes they know nothing about. The wellness center gets a regular rotation of students who need a few minutes alone or time with a counselor. More students are tardy than ever before. Administrators keep breaking up fights in the hallways, sometimes over dumb stuff, like when a boy hit other kids over the head with condoms he got from the wellness center.

For students like Am’Brianna Daniels, the stakes are enormous. High school is her ticket to college, and college is her way out: out of poverty, away from a mother who she says she fights with and who causes her enormous stress. The past year has only complicated her exit plan.

It’s just one on a list of impacts that might be rightfully pinned to the pandemic. Last semester, Am’Brianna virtually dropped out of school, not showing up for classes for weeks at a time. This year, she didn’t want to push herself too far or too fast. Am’Brianna is also not enrolled in AP Government. Eirik Nielsen, who teaches the class, blames the pandemic for that, too.

Her AP English teacher, Victor Zou, saw signs of intense anxiety and burnout in Am’Brianna. She would miss weeks of class, then show up. He’d talk to her about how to bring her grades up, and “then she’d be gone again.” Calls and emails from Zou and her counselor made little impact on her mental state. Her grade in English was a D for the third quarter. By April, she reengaged, and Zou justified a B for the semester.

By then, she had recorded 40 days absent in AP English, 36 in Ethnic Studies and 35 in U.S. history.

“I would have been in her ear the whole time … in a way that is reminding her that she is valued,” he said. He said he would have told her, “I need Am’Brianna’s voice there in my class because a lot of these kids, we’re going to be talking about political issues. They need to hear your voice.”

Told this, Am’Brianna laughed. Would Nielsen have succeeded? “Probably,” she said. While Am’Brianna opted out of AP Government, her schedule was still crushing her. “I am one stressed kid,” she said.

David Knight, a French teacher who is active in the union, had no regrets about advocating for remote school but clearly sees the damage done as a result of being home for so long. He finds students can’t stop looking at their phones, and sometimes are even on Discord during class. They simply are unable to focus, Knight said.

“If you’d asked me last year, I would have said, ‘Oh, online teaching was okay. Kids who wanted to learn could learn,’” he said. “But now coming back, I would change that. I think the kids have missed out a lot on social norms. … It’s as if they’re online while they’re sitting in school.”

Excerpted from “In a San Francisco High School, the Scars of Remote Schooling Linger” in The Washington Post. Read the full article online for more on Am’Brianna’s and other Burton High School students’ stories.