The Key to Effectively Treating Mental Illness: Eliminate the Stigma 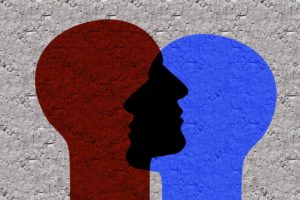 As with cancer and HIV in the past, the stigma comes at a high cost: millions of Americans go untreated because of misconceptions and shame. “Mental illness is much like cancer 75 years ago, because it’s scary and unpredictable. And because it’s still mysterious, people want to keep their distance,” says Stephen Hinshaw, PhD, vice chair for Psychology in UCSF’s Department of Psychiatry.

Hinshaw, who has written several books about mental health stigma, is part of a growing movement in psychiatry to tackle the issues of stigma head-on and remove the barriers to treatment. He and his colleagues are focused not only on educating the public about the prevalence and treatability of mental illness, but also pushing for policy changes. One of the biggest changes is the push to approach all treatment through the lens of neuroscience – treating mental illness as a biological condition, interacting with contextual factors, instead of merely a social issue.

“Serious mental illnesses fundamentally are no different from cancer or heart disease,” says Matthew State, MD, PhD, chair of the Department of Psychiatry and one of the leaders of the UCSF Weill Institute for Neurosciences. “The developing brain is particularly complex and we need a much better understanding of what’s causing those physiological disruptions and how to correct them.”

Everyone Is Impacted by Mental Illness

The effects of the stigmatization are far-reaching in the United States. The National Institute of Mental Health (NIMH) estimated that nearly one in five adults in the country – 43.8 million – was living with a mental illness in 2014. The rate among youth is just as staggering – one in five people aged 13 to 18 have experienced a serious mental disorder at some point during their life, according to NIMH.

Roopa Grewal says she felt like something was wrong with her as early as 5 years old when she would awake in the morning with horrible feelings. “I felt dirty and bad, basically like there was a black hole inside of me.”

Grewal, who is Indian-American, says she told her parents about her feelings, but facing stigma within the South Asian culture, there wasn’t any movement toward addressing her condition.

Only later, after she began cutting herself while a sophomore in high school, did her parents allow her to see a psychologist. Grewal says she began actively seeking mental health treatment from a psychiatrist as soon as she went to college, and it still took years to reach a proper diagnosis and receive treatment.

Read the full article online on the University of California at San Francisco News Center website.