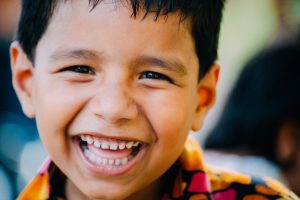 With an increasingly diverse child population across California, acknowledging and addressing health inequities is more critical than ever. In an effort to inform and educate the public on the many factors that contribute to disparate health outcomes, The Children’s Partnership developed a series of fact sheets as part of its “A Child is a Child” campaign.

Mayra E. Alvarez, president of The Children’s Partnership, to shared important findings from their fact sheet, Latinx Children’s Health Snapshot with KidsData, a program of the Lucile Packard Foundation for Children’s Health.

California is home to 4.7 million Latinx children and youth. They form a large and diverse population of California who navigate multiple intersecting identities, cultures, and languages. Latinx children and youth face disproportionate structural barriers as they navigate through life, whether it’s accessing health coverage and services, having enough healthy food to eat, or living in communities with the highest rates of environmental pollution.

A collective equity agenda transforms current programs and policies in order to ensure all children, no matter their background, have the resources and opportunities they need to reach their full potential and lead healthy lives.

As a result of the pandemic, these inequities in our child-serving systems have only been made worse, especially for children of color, such as Latinx children:

The pandemic is wreaking havoc on millions of Latinx, Black and immigrant families in California, while simultaneously shouldering the front-line work that has kept our state’s economy running. Nearly 75% of children and youth diagnosed with COVID-19 are Latinx, even though they make up just over half of the state’s population.

As a result of community trauma and exacerbated by the pandemic, mental health concerns have been growing for Latinx young people. Between 2007 and 2014, Latinx youth mental health hospitalizations rose 86% compared to a 21% increase among white youth. Latina youth are more likely to consider suicide than their male counterparts and white female youth. Over 1 in 3 (34.3%) Latina youth has considered suicide and nearly 1 in 7 Latina youth (13.3%) have attempted suicide. For lesbian, bisexual and queer Latina youth, the reality is even worse: nearly half (48%) has considered suicide; and 1 in 3 (33%) lesbian, bisexual, and queer Latina youth attempted suicide.

Systemic racism is at the root of health, income, and other inequities, which have widened as a result of the current crises. For Latinx families, access to healthy foods and safe environments has historically been a challenge and has only grown more difficult as a result of COVID-19. Latinx households with children are twice as likely to be experiencing food insecurity during the pandemic than white households with children. Latinx children make up 4 in 5 of children living in California census tracts impacted by the highest environmental pollution burdens and over half of students enrolled at schools impacted by
unsafe drinking water are Latinx.

Latinx children comprise a growing part of California’s children. Recognizing their critical importance to California’s future, these data suggest that caring for our kids must prioritize the specific needs of Latinx children. These data also drive home the need to address systemic racism in order to address the multiple challenges impeding the well-being of the state’s Latinx children. With this global emergency, an impending recession and a national reckoning on racial justice comes an even greater moral imperative to develop a more equitable infrastructure that increases safety net supports, health access, and mental health services so that California’s Latinx children and families can achieve their right to thrive.

Download a PDF of the Latinx Children’s Health fact sheet. More information about child health inequities for Latinx and other children is available from The Children’s Partnership. 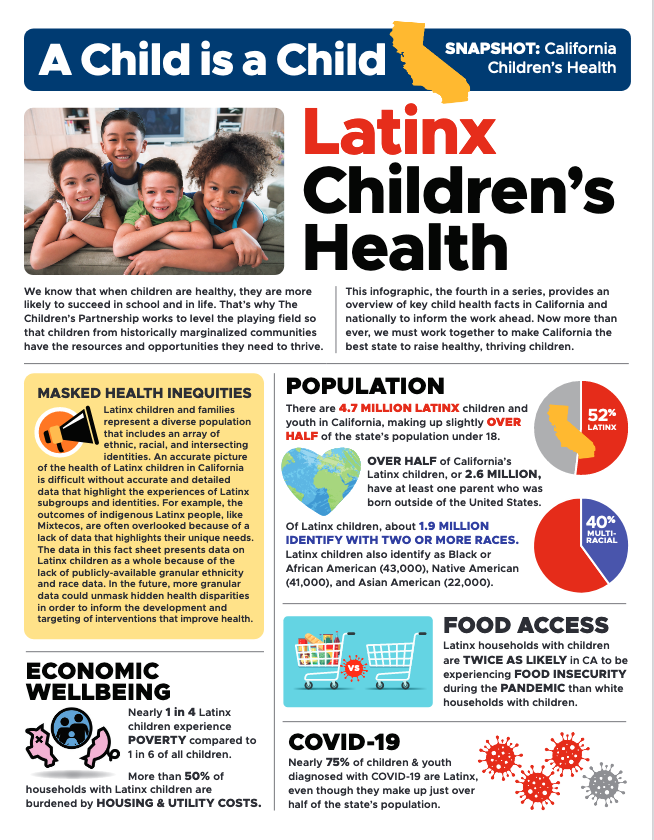 The information above was published in the October 7, 2020, KidsData blog post titled “Latinx Children in California.” Read the original post on the KidsData website.  Kidsdata.org, a program of the Lucile Packard Foundation for Children’s Health, promotes the health and wellbeing of children in California by providing an easy to use resource that offers high-quality, wide-ranging, local data to those who work on behalf of children.

If you would like to schedule an evaluation or get advice about your child’s challenges, call or email a CHC Care Manager at 650.688.3625 or careteam@chconline.org