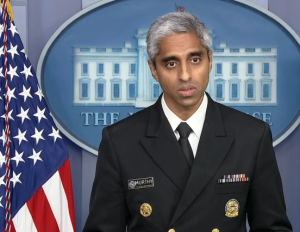 The United States surgeon general on Tuesday warned that young people are facing “devastating” mental health effects as a result of the challenges experienced by their generation, including the coronavirus pandemic.

The message came as part of a rare public advisory from the nation’s top physician, Dr. Vivek H. Murthy, in a 53-page report noting that the pandemic intensified mental health issues that were already widespread by the spring of 2020.

Globally, symptoms of anxiety and depression doubled during the pandemic, the report noted. But mental health issues were already on the rise in the United States, with emergency room visits related to depression, anxiety and similar conditions up 28 percent between 2011 and 2015.

The reasons are complex and not yet definitive. Adolescent brain chemistry and relationships with friends and family play a role, the report noted, as does a fast-paced media culture, which can leave some young minds feeling helpless.

“Young people are bombarded with messages through the media and popular culture that erode their sense of self-worth — telling them they are not good-looking enough, popular enough, smart enough or rich enough,” Dr. Murthy wrote in the report. “That comes as progress on legitimate, and distressing, issues like climate change, income inequality, racial injustice, the opioid epidemic and gun violence feels too slow.”

Although blame for adolescent distress is often pinned on social media, screen time alone does not account for the crisis, many researchers say. Rather, social media and other online activities act more to amplify an adolescent’s existing mental state, causing some young people to feel more distress and others to experience enhanced feelings of connection.

Authorities and scientists widely acknowledge that there has been insufficient research into the underlying causes.

“There’s a real dearth of scientists in this area just as there is a real dearth of clinicians,” said Dr. Joshua Gordon, director of the National Institute of Mental Health, in a recent interview. “Parents can’t get care for their kids.”

Across the country in a variety of settings — rural and urban, richer and poorer — there is a shortage of specialists who can assess conditions such as attention deficit hyperactivity disorder, anxiety, depression and eating disorders. In May, Children’s Hospital Colorado declared its first ever state of emergency for pediatric mental health, citing emergency rooms “flooded” with young people struggling with suicidal ideation and other issues.

Researchers have hypothesized that the pandemic intensified stress on young people, in part by isolating them during a period of their lives when social connection is vital for healthy development. But the pandemic does not tell the full story. In 2019, a group of U.S. lawmakers issued a report, “Ring the Alarm,” focusing on a suicide crisis among Black adolescents, a group that historically has seen relatively low rates of suicide.

Dr. Murthy’s advisory calls for more resources to be devoted to understanding and addressing mental health challenges, and it urges a greater appreciation of mental health as a key factor in overall health.