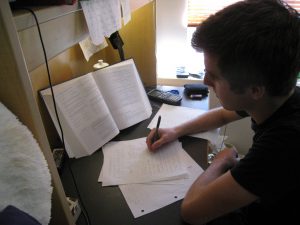 About half of college presidents say it’s “very likely” they will resume in-person classes for the coming term, according to a new American Council on Education (ACE) survey of 310 college leaders.

In order to restart operations, about two-thirds of presidents with on-campus housing say they plan to set up a space to quarantine students. More than half of all respondents said they will require masks to be worn on campus.

The results come as institutions mull whether current and projected public health conditions and access to testing supplies will enable them to begin the new academic year in person.

As most colleges wind down the academic year with classes online, their leaders’ attention has turned to whether they will be able to reopen campuses in the fall, when health experts predict a second wave of the virus.

A majority of the institutions that have announced their fall plans say they intend to resume face-to-face classes. But they have couched those statements, saying they can only reopen campus if local and state and restrictions have been lifted.

ACE’s survey confirms the plans executives have been sharing publicly. Their top two concerns are meeting enrollment goals and reopening campuses in the fall, though most think it’s at least somewhat likely they will start the academic year with in-person classes.

Only 1% of respondents said they have decided not to restart classes on campus. The California State University System is the largest higher ed entity so far to announce that most classes will remain online in the fall.

The trend differs for two-year colleges. Fewer than 40% of presidents at those schools said they would “very likely” start the academic year in-person, compared to 53% of all leaders who said the same. Five percent of two-year college presidents said they have decided not to restart fall classes on campus.

The University of California System floated the idea of reopening between a third and half of their dormitories, according to the Los Angeles Times, limiting how many students could live on campus.

A third of the respondents also said they intend to require coronavirus testing throughout the year, and a similar share said they will demand regular temperature screenings for students. While many colleges include on-campus testing in their reopening strategy, it is not widely available and can prove costly for them.

Excerpted from “Half of presidents aim to restart classes in-person this fall, survey finds” in Education DIVE. Read the full article.

See the latest survey results on the American Council of Education website for additional insights.

Do you need someone to talk to? CHC can help.  We invite you to call or email our Care Managers at 650.688.3625 or careteam@chconline.org  to set up a free 30-minute consultation.