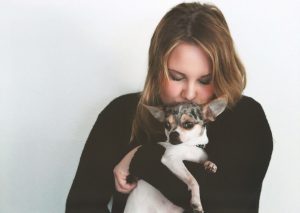 Spending just one hour per week for a month with therapy dogs led to a significant improvement in executive functioning for college students at risk of failing academically.

Patricia Pendry, professor in the human development department at Washington State University, had long been intrigued by the potential dogs have to reduce stress.

“As a scientist, I think I felt like the literature was often overstating the impacts of animals on stress and well-being,” she says. “So I really wanted to put it to the most rigorous test by one having random assignment to conditions, but then also not just comparing it to treatment versus non-treatment, but actually comparing it to something that we know from other work has been shown to be effective in reducing stress.”

Pendry recently led research that followed these conditions and found spending just one hour per week for a month with therapy dogs led to a significant improvement in executive functioning for college students at risk of failing academically. Her study was recently published in AERA Open, a peer-reviewed journal of the American Educational Research Association.

Pendry worked with Alexa Carr and Jaymie Vandagriff at Washington State University, and Nancy Gee, a professor at Virginia Commonwealth University, to recruit 309 undergraduate students for the research. Of these,121 were considered at-risk academically, and had a self-identified history of academic failure, thoughts of suicide, mental health issues, or learning disabilities.

Only the at-risk students assigned to spend an hour with therapy dogs showed significant improvement in their executive functioning, a term for the skills one needs to plan, organize, motivate, concentrate, and memorize.

Students not at-risk academically showed no significant improvement from any of the three programs, and neither did students assigned to be with the therapy dogs for only a half hour or not all.

When you’re conducting stress prevention programs, you want to consider the population that you are engaging with and possibly targeting certain individuals, Pendry says.

Given this, and that animals are a limited resource, Pendry says schools may want to be more targeted in their use of therapy dogs. “They’re a very precious resource — they’re live, sentient beings and we have to protect their well-being,” she says. “I would want to make sure people only draw them in and engage with them in ways that we know are beneficial.”

She also cautions against reading too much into a single study.

“The length of the program and what we did and how we did it, we know that that worked,” she says. “But we shouldn’t just suddenly say, ‘Hey, we need animals on campus for everyone.’ We don’t want to overstate our case.”