What Kindergarten Struggles Could Mean for a Child’s Later Years 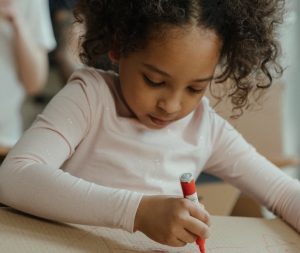 Kindergarten is designed for young children, who learn best by doing. And while pre-literacy and math skills are covered, building block towers, playing make-believe and mastering the playground equipment are also key elements of this critical grade.

“I don’t want to pit one grade against another,” said Laura Bornfreund, the director of early and elementary education policy at New America, a progressive think tank. “But the foundational knowledge, the skills to be able to learn and do well in school later are so important. Kindergarten matters a lot.”

Approximately 3.7 million 5-year-olds were expected to enroll in kindergarten this fall. In pandemic times, most of them — 62 percent by one estimate — were slated to start the school year sitting at home in front of a computer.

Asked what 5-year-olds stand to lose if their entire kindergarten experience is moved online, Bornfreund was concise: “All of it.”

And children who already have the least stand to lose the most. Research has shown that high-quality early education benefits children, especially children from low-income families, through to their adulthood. A strong start can improve academic achievement, financial independence, even heart health. For the most vulnerable students, missing kindergarten could become a permanent handicap.

As consensus grows that schools are not the superspreaders of the virus they were initially feared to be, many districts are working to bring their youngest students back to school. However, students of color were the least likely to return to school in person this fall.

If missing kindergarten “could happen equitably it doesn’t seem like a tragedy to me, but the fact is that kids’ experiences are just going to be incredibly unequal,” said Mimi Engel, an associate professor of education at the University of Colorado, Boulder, who studies how children learn in kindergarten.

“We already have something that’s ‘good online kindergarten’ called Sesame Street,” said Engel. “That’s quality programming originally targeted to low-income kids. You’d want something as engaging as that. And to expect a teacher to create that is unreasonable.”

What life looks like for 5-year-olds this year will vary immensely depending on where they live, who they live with and whether their schools are offering instruction online or in person. What is certain is that many, if not most, of this year’s kindergartners will enter first grade knowing less than they would have learned in a typical year. And the variation between what different kids know will have grown.

“We can’t just ignore going into first grade that kids didn’t have kindergarten,” said Bornfreund. “Without the recognition that this year was just a loss, that’s going to be to the detriment of kids.”

And when schools do reopen, this missed year will have to be accounted for, said kindergarten expert Bornfreund. Indeed, first grade teachers should be prepared to start their 2021 school year in more of a kindergarten mindset, she said. She wants to see districts bring kids to school next summer, if it’s safe, to stem learning loss. And she hopes educators use the moment to step back and think deeply about what makes kindergarten so important and then focus on that.

In the meantime, she said, offering social-emotional support to young children and their families is going to be paramount for the 2020-21 school year.

“Understanding where they are will help the academic learning,” Bornfreund said. “This is just an especially challenging time.”

Excerpted from “What Kindergarten Struggles Could Mean for a Child’s Later Years” in KQED’s MindShift. Read the full article online.