Raising a Son with ADHD: One Mother’s Journey 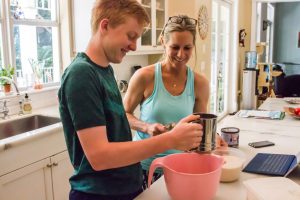 CHC staff member Lauren Sims recounts her experience with raising a son who has ADHD—the challenges and the rewards—and offers advice for parents who may be just beginning their ADHD journey.

My husband and I could tell by his first birthday that our son was more energetic than other boys and girls. At the time we found it endearing. (We still do). Around 18 months, we started to see that he was unusually oppositional when we asked him not to do something or when he didn’t get his way. We took him in to be evaluated rather early, around 4.5 years old.

Our son’s diagnosis confirmed our fears and raised endless questions: How hard was it going to be for him to learn in the classroom compared to his peers? Was he going to like learning? He was already having a hard time with friends at 4 years old–would he be able to make lasting friendships and be accepted by his peers? And the biggest question most parents have: will he grow out of it eventually?

I felt very alone with everything we were going through at home because none of the other parents around us were talking about learning differences. There was almost a competitive feeling among parents regarding what schools their kids were going to, what sports and extracurricular activities they were in. No one was being vulnerable and discussing issues like tantrums or attention problems.

It wasn’t until I met a group of neighbors who had older boys that I felt I had finally found a group of people I could talk to. These women talked openly about dyslexia, ADHD and challenging behavior and were not afraid to say what was really going on in their homes. The best tip I received from one neighbor was to go to CHC and see Dr. Glen Elliott.

Seeing a specialized psychiatrist like Dr. Elliot allowed us to ask hard questions and gather data on how children with ADHD develop. A good psychiatrist offers a wealth of knowledge on brain development, research studies, medication options and advice. CHC also recommended a behavioral therapist for my son. We got very lucky in finding someone so wonderful who understood how to engage him. Some therapy sessions were done outdoors shooting a basketball.

Free CHC Parent Support Groups for ADHD began when my son was 9, and I found them to be a really helpful resource. For three years, I was able to learn tips and tricks from other parents: how they were approaching teachers, getting their kids to sleep and managing screen time. Groups allow you to discuss your worries, share experiences with medication, vent frustrations on how exhausting it all is, and even cry. We all had our tearful moments, and it was a safe space filled with parents who completely understood what I was going through, which was so therapeutic.

At first we didn’t really want to tell people we didn’t know well because of the judgement we felt. But we realized that hiding it wasn’t healthy for us or our son. I have learned over the last 9 years to be completely up front about it. In order to fight the stigma around learning differences, I casually mention his ADHD to every teacher, coach or friend who spends a lot of time with him. I am not trying to label him, but rather help people understand why he is talking so fast, interrupting, or maybe not listening when being spoken to. In today’s climate, we put a lot of expectations on boys and how they should behave. Letting teachers and coaches know about his learning difference has only helped them gain a better understanding of him. If a friend or coach doesn’t want my kid around or on the team because of his big personality or the fact that he gets distracted, then that relationship isn’t meant to be. There are plenty of coaches that are happy to have him.

When our son was between the ages of 5-9, he was considered to be really wild, impulsive and too full of energy by a handful of parents. Of course, that was really hard for him and hurtful to us as parents to be left out or feel judged at times.

We ended up seeking out other kids who were into sports and tried to create playdates that would set him up for success. For example, a quiet friend who only likes movies, video games or Legos wouldn’t be the best fit for him. We would carefully plan something fun and exhausting. Flag football, lunch, playing outside and limiting it to about three hours. We found larger groups to be tougher behavior-wise as our son would always want to be the center of attention, so 1-2 friends at a time seemed to work better in the younger years.

Behavioral therapy at CHC really helped my son between the ages 8-13 in terms of friendships. I really believe he wouldn’t have the friends he does today without the skills he learned in therapy. I think behavioral therapy is great for ADHD kids and a lot of neurotypical kids as well.

At times it can be hard to explain to ADHD kids how their behavior affects others. We still spend hours and hours on this at home. They can’t read the room in the moment and can get stuck on what they want. It isn’t until later, after a long and sometimes frustrating conversation, they finally see how their actions or words were hurtful.

The hardest part has been the oppositional defiance piece that happens for some ADHD kids. Our son has moments where he wants something, and it doesn’t matter how many consequences you give him, he is just stuck. If you don’t want to give him whatever he wants then he is extremely angry at you. We have another son, so we feel a lot of guilt when this chaos affects him. We are fortunate to have family close by to help us by coming over when things become too tense.

Teachers and schools have the best intentions, but most of the time they are short staffed and do not have a lot of bandwidth to help your child with their executive functioning difficulties. It is hard to be patient when a student keeps forgetting their homework or constantly talking to the friend next to them. Many ADHD kids require accommodations which is extra work for the teachers. We have had a few wonderful teachers take on the challenge and have been really pleased when they figure out the perfect balance of what helps our son succeed. Other teachers have really resented him, punished him constantly, and made their favoritism of the other students obvious to try and teach him a lesson.

One tip I have learned is that you have to be really pushy and ask for a meeting earlier than the scheduled school conference. It is a great time to review accommodations and concerns and set attainable goals together. Setting the tone early that you are going to be very involved as a parent shows that you are open to hearing about attention issues and are willing to partner to reinforce expectations at home. There will be a small percentage of teachers that will not want to meet with you, and you might have to go to the principal to get them involved. I am not really comfortable in this role of demanding things, but I have learned that you are your child’s only advocate. If you don’t fight for their accommodations, they might fly under the radar and have a rough year.

Also, I go out of my way to volunteer at school when I can to show my support and give a really thoughtful holiday present to all teachers involved. The fact is that my child requires extra attention, so I always make sure to tell the teachers how much we appreciate them.

To Medicate or Not to Medicate

Going on medication was one of the hardest decisions for us. As someone who eats organic food and doesn’t like artificial coloring, it was hard to get behind medicating our young child. We are so thankful we went to a psychiatrist that specializes in medication before making these big decisions. As it turns out, medication is necessary for our child to focus for more than 10 minutes, and it makes him “feel normal and focused” (to use his words).

The Gifts of ADHD

ADHD has given my son many gifts. It has definitely made him a better athlete. He has so much physical energy and is determined to learn new things and perfect anything he is working on. He is smart and very curious about everything, asking great questions every day.

When he was 2, he loved sharks, so he memorized an entire book of about 60 different species of sharks. He couldn’t read yet, but we were so amazed at his ability to memorize facts.

He now uses YouTube to learn new skateboarding tricks, how to draw something, or––the new thing this week—boxing workouts to try and get faster and build muscle. If he is interested in something he is going to figure out how to master it. (Though getting this level of determination behind schoolwork can be a little trickier.)

His personality can be so charming. He can talk most people into anything and he has us laughing a lot. The ADHD qualities are part of his personality, so we wouldn’t have it any other way.

Advice for Other Parents

For parents just starting out on their ADHD journeys, I would recommend getting an evaluation through the school (if you can) or privately. Most schools require it in order to get accommodations, and it will help identify where your child is struggling learning- wise. If issues with focusing are consistently affecting their schoolwork, look into discussing medication options with a psychiatrist who specializes in learning differences. Many kids with ADHD also have other challenges like dyslexia or anxiety, which can make choosing the right medication and dosage tricky.

Driven to Distraction is my favorite book that helps describe what it is like to be a person with ADHD. I had many “aha” moments from that book that I still think about today.

Surround yourself with at least a couple of friends and family members who you can really talk to about your home and school struggles. There are so many other people that are going through the same exact thing as you, so find those people. Utilize free parent support groups and educational resource libraries. CHC is a great place to start.

Lastly, on the hardest days, remind yourself of all the good things about your child and just have faith that if you continue to shower them with love––even on their worst days––they will grow into the wonderful, loving person that you helped raise them to be.