Teens Are Flocking to New Photo-Sharing Apps. Are They Safe? 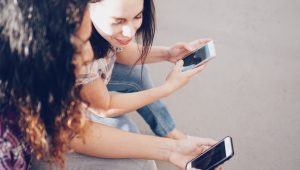 As Snapchat and Instagram draw criticism for safety and mental health concerns, some young people are opting for a different way to keep in touch. Photo “widgets” LiveIn and Locket are grabbing attention for their fuss-free photo sharing — just snap a photo and it pops up in a tiny window on your friend’s home screen.

The Washington Post examined these apps and found privacy problems, as well as some safety risks for parents to keep in mind.

Are LiveIn and Locket private?

LiveIn and Locket are designed for sharing “moments,” or photos, with individual friends or small groups. But LiveIn also comes with drawing and typing options, as well as a global feed and a comment function, which add a social media element. If teens share photos to the global feed, anyone can see them and send them friend requests. Sharing to friends or followers only is safer, but there’s currently no setting for parents to limit that sharing. Teens can also scroll LiveIn’s global feed whenever.

A LiveIn spokesperson said the app “puts great effort” into moderating the feed.

Users on LiveIn can search through usernames and send friend requests to people they don’t know. Talk with your teen about how to respond if they receive requests from strangers.

Co-founder Johnny Lin at privacy app Lockdown said he observed data from LiveIn flowing to third parties, including Facebook and Google. Locket shares data with third parties including Google and Snap, according to Lin’s analysis. Neither LiveIn nor Locket discloses in their privacy policies that they share data with outside companies, which could be a violation of the California Consumer Privacy Act if the apps have more than 50,000 users in the state.

When you share on LiveIn, the parent company and its affiliates get a “worldwide, royalty-free, sublicensable, and transferrable license to host, store, cache, use, display, reproduce, modify, adapt, edit, publish, analyze, transmit, and distribute that content,” according to its terms of service. Similarly, Locket’s parent company and its affiliates can “copy, display, upload, perform, distribute, store, modify, and otherwise use your user content in connection with the operation of the service in any form, medium or technology now known or later developed.”

Both apps ask to access your contacts and camera, though on LiveIn, I was able to invite friends without syncing my contacts. Contact-sharing has a history of privacy problems, and many apps aren’t clear on what use they make of your address book.

What ages are these for?

LiveIn and Locket are listed for ages 12 and older on the Apple App Store. But that doesn’t necessarily mean they’re appropriate for middle-schoolers and younger teens, said Chris McKenna, founder of the digital safety organization Protect Young Eyes. He recommends waiting until high school — junior high is complicated enough without giving kids access to a constant stream of images from other people’s lives, he said.

McKenna recommends that parents use it themselves for seven full days to get a sense of any safety concerns.

“Read the privacy policy. Use it for seven straight days like they would, and then ask yourself, ‘Is my son or daughter, with their maturity, ready?’

Should parents be worried?

Perhaps the biggest is the potential for cyberbullying, said Titania Jordan, chief marketing officer for the parental control app Bark. Receiving unsolicited nude images is already a huge problem for teenagers, Jordan said, and this method of photo sharing could appeal to jokesters, bullies and abusers alike.

Locket only allows for 10 friends at a time. Anyone who lived through the Myspace era remembers the hurt feelings that come when apps push us to rank our friends.

Overall, parents should pay just as much attention to photo widgets as they do social media apps, Jordan noted, because anywhere teens spend time online, predators will go, too.

Excerpted from “Teens Are Flocking to New Photo-Sharing Apps. Are They Safe?” in The Washington Post. Read the full article online.