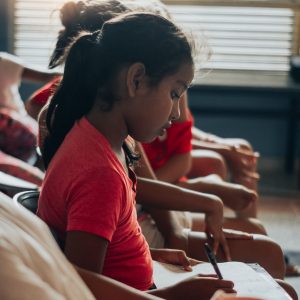 Equity has long been a problem in American education. In many ways, the issues playing out between police and communities of color — including implicit bias and overly harsh punishment — are playing out in schools, too.

Here are four things to know about how racial inequity affects the nation’s school children.

Black students are more likely to be arrested at school.

“If you’ve got a kid who is black, there’s a decent amount of research that shows that good, well-intentioned and not overtly racist people will look at that situation and judge it to be more threatening,” said Josh Gupta-Kagan, a law professor at the University of South Carolina.

Black students are more likely to be suspended.

Students with disabilities were also twice as likely to be suspended as those without disabilities. According to federal data, special education students are also more likely to be Native American or black.

Implicit bias isn’t just a police problem — it happens in preschool, too.

A 2016 paper from the Yale Child Study Center looked at how implicit bias plays out in preschool classrooms. The study was simple: Preschool teachers were shown videos of four children — a black boy and girl, and a white boy and girl — and were asked to flag any “challenging behavior.” The kicker was that the videos didn’t actually display any challenging behavior.

Lead researcher Walter Gilliam wanted to know: When teachers expected bad behavior, who did they watch?

“What we found was exactly what we expected based on the rates at which children are expelled from preschool programs,” Gilliam said. “Teachers looked more at the black children than the white children, and they looked specifically more at the African-American boy.”

In 2019, a report from the nonprofit EdBuild began with a striking number: $23 billion. That’s how much more funding predominantly white school districts receive compared with districts that serve mostly students of color.

What’s causing that disparity? A school district’s resources often come down to how wealthy an area is and how much residents pay in taxes, explained Rebecca Sibilia, founder and CEO of EdBuild.

Funding inequities will likely get worse during the current pandemic. With state income and sales tax revenues crashing, some governors are already cutting their education budgets. Education leaders are warning the cuts could lead to a devastating financial meltdown for schools.

The same is true when it comes to the challenges around remote learning. Households without access to high-speed internet are more likely to be black or Hispanic a survey from the Pew Research Center found. With schools relying so heavily on remote learning during the pandemic, students in these households are also more at risk of falling behind.