What to Say to Kids When The News Is Scary 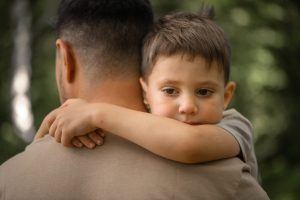 The news can be devastating. Events such as a mass shooting at an elementary school can be incomprehensible to adults — so how do we talk about them with kids? KQED’s MindShift spoke with a handful of child development experts about what parents, teachers and other caregivers can say to help kids process all the scary news out there.

Limit their exposure to breaking news

Rosemarie Truglio, senior vice president of curriculum and content at Sesame Workshop says that for starters, try not to let your children experience the news without you. That includes letting the TV or audio play in the background. In 2017, 42 percent of parents of young children told Common Sense Media that the TV is on “always” or “most” of the time.

Truglio says that because we can’t control the news itself, adults need to control the technology that exposes kids to potentially traumatic news.

For big stories, ask: “What have you heard and how are you feeling?”

While it’s important to limit your kids’ exposure to potentially frightening media, some stories are simply too big to avoid. And as kids get older, if they don’t hear about it at home, they’ll almost certainly hear something from classmates at school.

Tara Conley, a media researcher at Montclair State University, says adults should choose a quiet moment to check in with their kids, maybe at the dinner table or at bedtime.

Give kids facts and context

Truglio says that if scary news is happening far from home, the best thing a parent or caregiver can do is to reach for a map. Then, she says, a child could “see distance, that it’s not in their immediate environment.”

Some traumatic events, however, might be closer to home — a school shooting, for example. In that case, it’s important to convey that, overall, such events are incredibly rare. After all, that’s why it’s news.

When they ask why something happened, avoid labels like “bad guys”

Truglio says we should resist the temptation to label anyone “bad guys” or “evil.” It’s not helpful, and it may increase fear and confusion. Instead, she says, talk about people being in pain, being angry and making bad choices.

And according to Truglio, there’s one important thing parents shouldn’t be afraid to say: I don’t know.

Encourage kids to process the story through play and art

Children often try to make sense of what they see and hear through art and creative play. Sometimes it can be disturbing for adults to see children reenact or draw something scary or violent, but this kind of play serves an important purpose.

Conley says, “Play is part of reconstructing [children’s] own stories.” She calls it “meaning-making” and says adults do it too — by discussing stories with friends or even sharing memes on social media. “It also helps us make sense of the world around us … when we’re being bombarded with information,” she explains, “and it helps us discern credible information.”

“Look for the helpers”

There’s evidence that talking about helpers really does make a difference in how kids see their world. After the Columbine school shooting in 1999, Sesame Workshop studied school-age children’s perceptions of the world through their drawings. The images were full of violence, Truglio says: “guns and knives and dead people.”

But after the Sept. 11 attacks, just two years later, media coverage changed, she says, focusing more on themes like “the country is strong. And this made a difference for kids: Their drawings featured American flags and heroes like police officers or firefighters.

Excerpted from “What to Say to Kids When The News Is Scary” in KQED’s MindShift. Read the full article, or listen to an audio version of the article online.

Source: MindShift | What to Say to Kids When The News Is Scary, https://www.kqed.org/mindshift/59143/war-crisis-tragedy-how-to-talk-with-kids-when-the-news-is-scary | Copyright © 2022 KQED INC