What You Need to Know About Eating Disorders 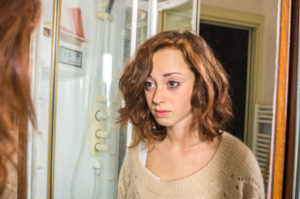 Other symptoms may develop over time, including:

People with bulimia nervosa have recurrent and frequent episodes of eating unusually large amounts of food and feeling a lack of control over these episodes. This binge-eating is followed by behavior that compensates for the overeating such as forced vomiting, excessive use of laxatives or diuretics, fasting, excessive exercise, or a combination of these behaviors. Unlike anorexia nervosa, people with bulimia nervosa usually maintain what is considered a healthy or relatively normal weight.

Eating disorders frequently appear during the teen years or young adulthood but may also develop during childhood or later in life. These disorders affect both genders, although rates among women are higher than among men. Like women who have eating disorders, men also have a distorted sense of body image. For example, men may have muscle dysmorphia, a type of disorder marked by an extreme concern with becoming more muscular.

One approach involves the study of human genes. Eating disorders run in families. Researchers are working to identify DNA variations that are linked to the increased risk of developing eating disorders.

Brain imaging studies are also providing a better understanding of eating disorders. For example, researchers have found differences in patterns of brain activity in women with eating disorders in comparison with healthy women. This kind of research can help guide the development of new means of diagnosis and treatment of eating disorders.

Adequate nutrition, reducing excessive exercise, and stopping purging behaviors are the foundations of treatment. Treatment plans are tailored to individual needs and may include one or more of the following:

Psychotherapies such as a family-based therapy called the Maudsley approach, where parents of adolescents with anorexia nervosa assume responsibility for feeding their child, appear to be very effective in helping people gain weight and improve eating habits and moods.

To reduce or eliminate binge-eating and purging behaviors, people may undergo cognitive behavioral therapy (CBT), which is another type of psychotherapy that helps a person learn how to identify distorted or unhelpful thinking patterns and recognize and change inaccurate beliefs.

Evidence also suggests that medications such as antidepressants, antipsychotics, or mood stabilizers approved by the U.S. Food and Drug Administration (FDA) may also be helpful for treating eating disorders and other co-occurring illnesses such as anxiety or depression.

Are you interested in learning about studies or participating in a clinical trial?  Visit the NIMH Clinical Trials — Participants or Join a Study pages for more information.