When Does Disruptive Behavior Merit a Mental Health Diagnosis? 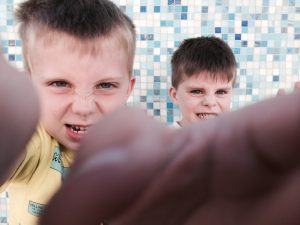 Having a child with any of these behaviors can be a challenging experience. And while all children tend to act out from time to time, children with disruptive behavior disorders have persistent patterns of behavioral challenges that occur across settings and are much more extreme than other kids their age. Additionally, there can be shame and delayed treatment associated with these disorders as parents often worry it’s a reflection of their parenting. “These children are most comfortable when they’re in the middle of a conflict,” says Douglas Riley, Ph.D., author of The Defiant Child. “As soon as you begin arguing with them, you’re on their turf. They keep throwing out the bait, and their parents keep taking it — until the parents end up with the kid in family therapy, wondering where they’ve gone wrong.”

Why Is My Child Acting This Way?

Over time, parents may wonder: “Are my child’s meltdowns developmentally appropriate, or do they merit a mental health diagnosis?” More importantly, “Why are they acting this way? Is it ADHD, anxiety, or what is going on? Am I disciplining them in the right ways? What treatment options are available?”

Without a mental health evaluation, it can be, understandably, difficult to tease out. In an effort to determine age appropriate versus pathological, many concerned parents often begin by Google searching their child’s behaviors. In doing so, they might come across the following diagnoses: Disruptive Mood Dysregulation Disorder (DMDD), Oppositional Defiant Disorder (ODD), Intermittent Explosive Disorder (IED). A lot of the symptoms under each of these diagnoses overlap, and it can be difficult to make sense of. Seeking out mental health evaluations to get diagnostic clarity can help parents understand their child’s patterns of behavior. More importantly, it can provide parents with the tools to help their child succeed.

Disruptive Mood Dysregulation Disorder (DMDD) is a newbie to the DSM-5 (the DSM-5 is the standardized diagnostic manual for mental health professionals). Prior to DMDD being added to the DSM-5, many of these kids were lumped under the diagnosis of Bipolar Disorder, even if they didn’t have all of the associated signs or symptoms. DMDD differentiates from Bipolar Disorder in that children with DMDD have chronic irritability at their baseline level of functioning, which is often accompanied by frequent explosive behavior, whereas children with Bipolar Disorder have episodic mania or episodic explosive behavior, with periods of depression that occur in between these episodes of irritability.

The severe mood dysregulation with chronic irritability in DMDD is an important distinction from Bipolar Disorder to prevent misdiagnosis.

To be diagnosed with DMDD, a child must have each of these symptoms steadily for at least 12 months.

Children who have Oppositional Defiant Disorder (ODD) have a well-established pattern of: a) angry and irritable mood, b) argumentative/defiant behavior, and c) vindictiveness, that is much more extreme than their peers. Children with ODD have difficulty controlling their temper and tend to purposefully bother and irritate others.

ODD also commonly co-occurs with ADHD; one study found that up to 40% of children with ADHD also having severe oppositional and defiant behaviors that meet criteria for ODD. One theory behind this is children with ADHD are more at risk to developing disruptive behavior disorders due to underlying impulsivity. And while ADHD and ODD can certainly co-occur, it is important to note that kids with primarily ADHD act out because they have trouble controlling their impulses, whereas children with primarily ODD act out because they are intentionally oppositional.

To be diagnosed with ODD, a child must demonstrate at least four of the above symptoms with associated behavior that occurs at least once per week for at least 6 months.

Children with Intermittent Explosive Disorder (IED) are notable distinct from both ODD and DMDD in that while they have episodes of explosive behavior, they are generally happy and euthymic at their baseline level of functioning. Irritability may still be present; however, it isn’t a defining feature of their general day-to-day functioning. Additionally, children must be at least 6 years old to receive a diagnosis of IED.

What if my child meets diagnostic criteria for two or more of these behavioral diagnoses?
In this case, the DSM-5 stipulates that the diagnosis of DMDD takes precedence over both ODD and IED.

If you think your child has DMDD, IED, or ODD, it is important to seek treatment. School supports, behavioral and parent management training, as well as medication in some cases, may help improve your child’s quality of life including functioning at home, performance at school, and relationships with family members and peers.

How Are Disruptive Behavior Disorders Treated?

Parent involvement is crucial for successful outcomes in treatment. Parent management training programs may include the therapist working with parents and children together, or just with parents alone. Parent management training programs include short-term interventions that teach parents specialized strategies including positive reinforcement, selective ignoring, the effective use of rewards and punishments, token economies, and time outs to address behavior problems.

Parents are formidable advocates for their children, and often utilize services in their school district to obtain accommodations for their child through an Individualized Education Plan (IEP) or 504 Plan. These supports can be vital for the child’s success in the classroom. While schools do not base their criteria for providing services on formal psychiatric disorders, they do typically rely on psychological or psychiatric assessment to help determine whether a child needs accommodations and what types of accommodations are most appropriate. Parents often seek an evaluation for diagnostic clarity at CHC so that they can relay this information to the school district. Diagnostic clarity can support kids in receiving the most evidence-based treatment and school accommodations (e.g., a 1:1 aide, reward chart to incentivize good behavior, breaks to cool down, crisis intervention training for staff, crisis deescalating communication for staff), that can in turn, allow them to thrive.

Whether or not medications are appropriate or even apt to be useful depends on the child’s diagnosis and the success of other types of interventions. For instance, it may be beneficial to use a stimulant or non-stimulant medication to treat ADHD or underlying impulsivity, or a selective serotonin reuptake inhibitor (SSRI) to treat underlying or comorbid anxiety, if those are the driving forces causing the irritability and aggression. According to Ross W. Greene, Ph.D, author of The Explosive Child, “When we reduce hyperactivity, impulsiveness, and inattention, perhaps through medication, we see simultaneous improvement in oppositional behavior.”

CHC offers free, engaging Community Education Sessions for parents. Check our event calendar for upcoming classes.  Past sessions and handouts are available in the Resource Library.