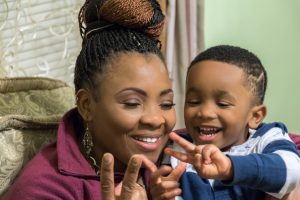 While literacy is often seen as a cornerstone to scholastic achievement, and many parents devote a lot of time and energy into nurturing their small child’s love of reading, studies show that mathematical reasoning ability may be even more crucial as a building block for success in school and beyond. That’s why experts say more attention should be paid to early numeracy in childhood.

When children understand early math concepts before they enter kindergarten, research shows, they perform better on math and reading tests in later years. But many children enter kindergarten already behind in math, at least partly because some parents lack confidence in their own math skills.

“Math, early numeracy, has definitely played a back seat to efforts to support early literacy development,” said Ben Clarke, an associate professor at the University of Oregon and an expert in math instruction. “But the same rationale that led to investments in a preventive framework in early literacy are present in mathematics. The relationship between early and later math is actually stronger than that of early to later literacy.”

Building that bridge is one of the core motivations behind Count Play Explore, a website and app that was developed through the California Early Math Initiative led by the Fresno County Office of Education. An engaging collection of resources for parents and teachers looking for something fun and meaningful to do with young children, this is a digital portal designed to dispel preconceived notions of math as stuffy and dull.

Count Play Explore tries to combat the slow progress in early math skills by making math more accessible with myriad memorable characters who add, subtract and measure their way from the kitchen table to the bus stop:

A parental antipathy for math may be one reason why the playing field is often uneven when children first come to kindergarten. Some already have a sense of what math means and how it functions in the world while others lack a basic understanding of numbers. That gap only gets harder to close as time goes on, experts say.

Because future math skills must be built on a strong foundation, experts say, it’s never too early to start sparking a love of numbers.

“Young learners need to be introduced to math concepts in developmentally appropriate ways,” said Gennie Gorback, president of the California Kindergarten Association. “They need opportunities to play with numbers and other mathematical concepts. Adults should make a habit of intentionally discussing developmentally appropriate math concepts every day.”

Fun is key when introducing children to the world of numbers, experts say. Small children may enjoy counting blocks while older kids can practice doubling or halving recipe ingredients. Gorback also suggests counting aloud and playing board games to make math a part of everyday life.

Excerpted from “Benefits of Early Math Experiences Add Up” in EdSource. Read the full article online.