Election Stress Getting To You? 4 Ways To Keep Calm 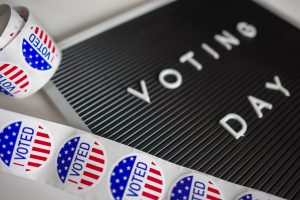 With Election Day just around the corner, many Americans are on edge. Nearly 70% of respondents said the elections are a significant source of stress, according to a survey out this month from the American Psychological Association.

The survey also found that a majority — 77% — are worried about the country’s future, says Vaile Wright, senior director of health care innovation at the American Psychological Association. “Seventy-one percent said that this is the lowest point in our nation’s history that they can remember.”

Panicking about politics is a bipartisan experience, says the APA’s Wright. “It cuts across party lines, where we see the majority of Democrats, Republicans and independents reporting high levels of stress related to the upcoming election,” she says.

Ways to cope with the stress

Uncertainty really gets to us, says Lynn Bufka, a psychologist with the APA. “What causes stress and uncertainty is when things feel out of our control, when they seem like we don’t know what’s going to happen,” she says.

A good way to cope with all the unknowns is to start by managing our expectations, says Bufka. And then focus on the big picture. Here’s how.

First of all, expect delays in election results. “The reason that’s important is mentally, if we’re expecting a clear answer and we don’t have it, that just extends the uncertainty for us,” she says.

It could be days or a couple of weeks before we have a clear answer.

2. Double down on stress-reducing habits

There are also some simple, healthy habits that are known to buffer us against stress, says Wright.

“We need to be eating healthy. We need to really be getting the right amount of sleep,” she says. “We need to be staying active. That can mean even just going for a walk. And we need to maintain those social connections.”

3. Replace scrolling with something nourishing

It helps to unplug from news and devices every now and then, Wright says. “We need to know what’s going on, but we don’t need the late-breaking news every second of the day,” she says. “We know that that connection to our devices … a constant connection to information, actually drives up our stress levels.”

4. Look for signs of hope

The new survey also found that the majority of Americans do still feel hopeful despite their stresses.

Excerpted from “Election Stress Getting To You? 4 Ways To Keep Calm” on NPR. Listen to NPR’s Rhitu Chatterjee  interview people about how they’re feeling and how to cope in this short podcast: