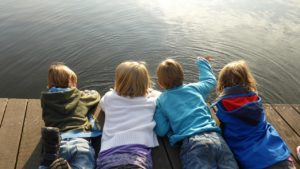 While every parent hopes that his child will fit in and be accepted, making friends is not easy for all children. Many families share similar stories: “My son was excited when he started first grade, but now he seems sad and prefers to play by himself,” or, “Our daughter doesn’t like going to school anymore. She plays sick to avoid it. Her teacher says it’s possible she may be getting bullied at recess.” Some children have a hard time making friends because of impulsive, anxious or introverted behavior. They need more help than their socially-adept peers for learning how to relate to and interact with others. If your child is struggling with social skills, prepare him with strategies that help him feel confident and ready to forge new friendships.

For shy or anxious children, plan play dates in your home. Try these steps, engaging your child throughout the process.

By taking part in play dates, your child will gain important experience for playing with others and dealing with conflicts as they arise. Introducing him to play dates at home is a good way of easing him into being more social. As his play dates become more successful, he’ll feel more comfortable seeking out and making friends when he is away from home.

Learning to resolve schoolyard conflicts is an important part of making and keeping friends for children. Practice the acronym STICK at home so that your child can recognize when to use it. For example, when he has trouble managing anger about cleaning his room before playing video games, ask him to Stop and Think about what he’s going to say in a disagreement and how the other person might be feeling. Children under the age of seven especially can struggle with taking other people’s point of view. Help him use “I” language to communicate his feelings, for instance, “I feel mad about not being able to play video games.” Naming his feelings without blaming the other person will help him arrive at a Compromise more rationally and calmly. Encourage compromise to solve conflicts and emphasize its importance. Meeting halfway or offering a simple apology can solve many conflicts, even if your child doesn’t feel that he did anything on purpose to warrant an apology. After the disagreement is resolved, tell him to, “Knock it off.” In other words, encourage him to let go of worries or anxieties about the resolution and move on.

Children with unconventional and unique personalities can also stumble socially. They may have a tough time relating to their peers or feel unsure about how to communicate with them. Teach your child to become a social detective so he can better understand the motives and intentions of the people around him. Ask him to observe what other people do and say. Secondly, ask him to anticipate what someone might do next in a given scenario. Help him learn to read social cues by playing charades at home: Act like you’re getting ready for bed; exaggerate your facial expressions; start yawning and stretching; pretend to brush your teeth and get changed, then walk towards the stairs that lead to your bedroom; stop short of your final step and have him guess what you are going to do next. When he’s able to pick up on verbal and nonverbal cues, he’ll feel better equipped to interact with others and can better understand why people behave the way they do.

Your child should also know how to handle rejection gracefully. Give him scripts for dealing with being turned down so he stays engaged and avoids meltdowns. If he’s left out of a game on the playground, encourage him to display a good attitude by saying, “That’s okay. Maybe I can watch this time,” or even, “No problem. Have fun.” Children must understand that making friends and interacting with others will sometimes be difficult.

Help your child rationalize his thoughts when anger, sadness, anxiety or other big feelings are tough for him to manage. If he says something like, “Nobody wants to play with me,” let him know you understand by validating his feeling, e.g., “Sometimes, it’s hard to find people to play with.” Or if he says that everybody hates him, reassure him that it’s okay if some people don’t like him; let him know that there are plenty of others that do. However, make sure your child understands the difference between typical schoolyard conflicts and bullying. Children who struggle with social skills can be targets on the playground. If he is threatened or fears for his safety, alert a teacher, but encourage him to deal with other conflicts appropriately.

By giving children specific instructions and scripts, they can learn to be social, even if it doesn’t come naturally. Some children require extra help to leave their comfort zones and get along well with others. When you break down the skill of making and keeping friends into discrete steps, children have a better understanding of how to be successful. Social skills groups can also help children practice social interactions in a safe environment with a professional to coach them. With practice, your child can learn to forge friendships so that he no longer needs to avoid school or play by himself.