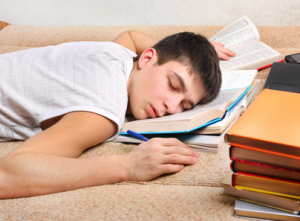 The physical and mental health benefits of getting a good night’s sleep are indisputable. What’s less clear is whether starting school later in the morning will prompt kids to sleep more and consequently learn more during the school day.

A new study in Minnesota documents what happened to 18,000 students in grades 5 through 11 after four school districts postponed the start of the school day by 20 to 65 minutes. Student grades increased a little, raising students’ grade point averages by an extra 0.1 points, on average. That’s the equivalent of moving from, say, a B average of a 3.1 to a B average of a 3.2.

Researchers from the University of Minnesota and the Bloomington, Minnesota, public schools characterized the academic benefits as “small” but the sleep increases as “large.”

In 2014, the American Pediatric Association recommended an 8:30 a.m. start time for high schools and middle schools so that teens can get sufficient sleep.

Schools have been slow to heed the doctors’ advice. Only 17 percent of U.S. high schools start the day at 8:30 a.m. or later, according to the most recent federal data.

“The findings from all of the research regarding the relationship between start time, sleep duration, and academic performance are not totally conclusive,” said Kyla Wahlstrom, a national expert of school start time research at the University of Minnesota. “That said, after 25 years of my looking at academic performance and start time, there is no question in my mind that greater sleep, meaning eight hours or more per night for teens, does in fact yield better academic performance,” Wahlstrom said. “This is because there is incontrovertible evidence that sleep enhances cognition and memory.”

One surprising result were the positive outcomes for 5th graders, who not only slept more but also achieved higher grades when they started school later. Advocates for later start times often focus on teens and are less worried about younger kids’ sleep. Perhaps the assumption that it’s more natural for younger kids to go to sleep earlier and wake up earlier needs to be re-evaluated. By contrast, the researchers didn’t see extra academic benefits for 11th graders after switching to a later schedule, compared to similar students in districts that continued to start the day early.