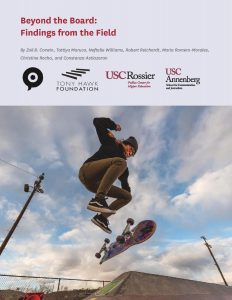 Partnerships between schools and skateboarding nonprofits, acknowledging the diversity among the skateboarding community, and linking skateboarders to internships and opportunities to use the skills they’ve developed through the sport are among recommendations researchers at the University of Southern California offer in a new report.

Based on case studies in seven U.S. locations, as well as a survey of over 5,700 respondents — including a large proportion of middle and high school students — the study, supported by the Tony Hawk Foundation, says being able to “stick with a challenge,” “think outside the box” and “solve tricky problems” are among the 21st century skills skateboarders believe they have gained.

With skateboarding making its Olympic debut this year, the study contributes to a shifting perception of skateboarders from loitering youth who don’t respect public property to resilient problem solvers who are eager to apply their skills to areas such as filmmaking, photography, music production and apparel design.

Students, the authors write, have learned to navigate different attitudes among school leaders toward their sport.

Excerpted from “Study: Skateboarding fosters 21st century, SEL skills” in Education DIVE. Read the full article.  Download the report, Beyond the Board: Findings from the Field.