Helping Kids by Texting Their Parents? Here’s What Experts Say About This Exploding Strategy 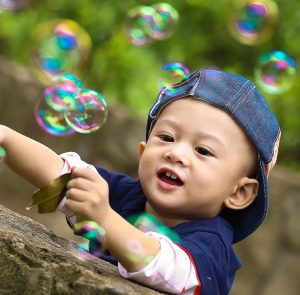 Texting programs aimed at parents of young children have proliferated over the last several years as smart phones have become ubiquitous and health and education groups look for new ways to get kids on track early.

They have names like Bright By Text, Vroom, Ready4K, Text4baby and Text2LiveHealthy. Some are open to all parents of young children, providing tips on activities that promote talking, reading, and learning. Others are more tightly focused, for instance targeting low-income parents whose children attend certain schools.

There’s evidence that such interventions can provide valuable nudges that help change behavior in parents and thus change the experiences their young children have. A 2014 study co-authored by the Stanford University researcher who later spun Ready4K into a commercial product, found that offering advice for parents via text on building early literacy skills increased the number of home literacy activities parents did with their children, upped parental involvement at school, and led to literacy gains among preschoolers.

Denver parent Bridget Gillogley, who has a 14-month-old daughter named Rory, signed up for Bright By Text a few months ago on the advice of a friend. Although she works as an early childhood special educator and knows a lot about child development, she said the text message tips suggest quick, easy activities she wouldn’t always think to pluck from her professional repertoire. For example, when she got a text message about creating different kinds of lines with a drawing utensil, she and Rory tried it out with crayons and paper, a stick in the sandbox and their fingers in shaving cream.

The messages give “you these little ideas on ways to engage with your child and things to look for.” Gillogley said. “What I really, really like about it is it’s not a huge commitment.”

The ease of text messaging is also a boon for program creators. Such interventions are far cheaper, less labor intensive, and easier to scale than common early childhood programs such as home visiting or parenting classes.

Experts say well-designed text message programs can make a meaningful difference for some children and families. Still, they’re no cure-all.

Ariel Kalil, a professor of public policy at the University of Chicago who has studied text messaging interventions, said, “You’re not going to text a family out of a violent neighborhood.”

Another researcher, Ben Castleman, said the low cost of texting campaigns can be alluring, but shouldn’t overshadow hard questions about whether they work.

“The inexpensiveness can be a distraction from whether these campaigns are effective when we scale them,” said Castleman, a professor at the University of Virginia who’s studied text messaging interventions that boost college enrollment and completion

We talked to researchers who’ve studied this strategy and the organizations that run texting programs to find out how and when texting is effective and the caveats that come with it.

Kalil’s team recently studied the use of text messages to encourage Chicago Head Start parents to get their children to school every day. The intervention, called “Show Up to Grow Up” increased daily attendance and reduced chronic absenteeism among participants. Some of the texts provided personalized information, such as how many days a child had been absent in recent weeks or what they’d learn in class on a given day if they showed up. Others offered planning tips such as putting the child’s shoes by the door the night before to make it easier to get out of the house.

Kalil said purveyors of text messaging programs need to understand parents’ behavior bottlenecks — the things that prevent them from doing the things they aspire to do. The problem could be as simple as procrastination or disorganization.

“If you can understand what is standing in the way of a parent knowing and wanting to do something,” text message interventions can be effective, she said.

One size doesn’t fit all

A recent study that compared a 25-week literacy-themed texting program with a health-themed texting program — both aimed at parents of preschoolers in Virginia — showed that the two had different benefits for different children. Researchers found that children with higher literacy skills at the start of preschool gained more from parent texts about reading stories, learning letters, and writing words, and that children with lower literacy skills saw bigger literacy gains when their parents received texts about nutrition, sleep habits, and other health topics.

Sonia Cabell, a professor at Florida State University and the study’s lead author, said, “Our cautionary note basically was, one size might not fit all and we need to have more research to help understand this better.”

She said she’s interested in finding out whether folding language and literacy texts into health and well-being texts would be more broadly effective.

This personalization push has increasingly led texting programs to customize messages to parents based on their language, location, and the age and needs of their child.

Personalization takes lots of forms — from something as simple as using the child’s name in messages to providing specific data about a child’s school attendance or performance.

The Denver-based nonprofit Bright By Text has begun sending parents text messages on community events like library storytimes, flu clinics, or free children’s museum days. It’s all based on the ZIP code they entered when they first signed up.

Subscribers — parents who are expecting and those with children up to age 8 — usually get one community event message a week and at least a couple more with brain development, health, and early learning tips based on their child’s age. Both types of texts come from a raft of partner organizations, including the city of Denver, which puts special emphasis on community resources in six high-poverty neighborhoods.

Bright By Text, which is free to any parent or caregiver, has more than 70,000 subscribers nationwide, with localized event texts now available in about half the states.

Jared Wigdor, vice president and chief development officer for Bright By Text, said 20% to 40% of Colorado subscribers click the links in local event texts — the organization’s most popular kind of message.

Ready4K, a texting program now run by the San Francisco Bay Area company ParentPowered, is experimenting with a new personalized program that uses a child’s developmental screening to send families messages specific to their child’s needs as well as links to referrals and services.

Rebecca Honig, director of content at ParentPowered, called the personalized version of the program, which is rolling out now in one region of California, “our next great frontier.”

More than 200,000 parents of children up to fourth grade already get Ready4K messages about learning activities through its traditional program, which tailors the messages based on the child’s age. Preschools, schools or school districts in all 50 states pay ParentPowered so their families can receive texts.

The 2014 study from Stanford researchers, one of whom later became the CEO of ParentPowered, found the traditional program leads to two to three months of learning gains by the time children enter kindergarten. A 2018 study by the CEO and three Stanford researchers found that texts personalized based on a child’s skills leads to four to five months of learning gains.

Layering with other interventions

While some text messaging programs are designed as stand-alone products, others supplement traditional interventions. One example, Text2LiveHealthy, is a two-year-old Colorado program aimed at low-income preschool parents. The program, funded by the federal food subsidy program SNAP, is meant to increase consumption of fruits and vegetables, reduce consumption of sugary drinks, and increase physical activity among children.

It builds on nutrition and exercise lessons incorporated into preschool classrooms, parent newsletters, family fun events, and a six-week parenting class. The text message program now has 3,000 subscribers in 11 Colorado counties. It includes three texts a week, including one on a local resource, such as a farmers market or free summer meals for children.

Jini Puma, associate director of the Rocky Mountain Prevention Research Center, said the six-week parenting class represents the “Cadillac” version of the program, but that it was a big ask for parents with multiple jobs or other conflicts.

Texting, she said, is “super effective to use in this way, where it’s part of a multilevel intervention.”

In theory, text messaging is accessible to almost everyone. A 2019 Pew Research Center report found that 96% of Americans have a cell phone, with the proportion jumping to 99% for people ages 18 to 49.

But those who design text messaging programs to boost school readiness or child health say language and cultural relevance matter, too. Text2LiveHealthy translators not only convert text messages into Spanish, but also tweak the content to better adapt to a Hispanic audience.

For example, an English text that provides a recipe for a holiday apple walnut salad is matched with a Spanish text that recommends using vegetable or canola oil in place of lard when making tamales for the holidays.

Puma said one-third of the program’s 3,000 subscribers receive the texts in Spanish. Based on the results of parent surveys asking if recipients made a positive change based on a texted tip, the program is even more effective for Spanish-speaking participants.

At ParentPowered, besides translating and adapting Ready4K texts for Spanish and Arabic-speaking parents, program leaders don’t include links in most of their texts. The idea is to ensure that parents without data plans or internet access can get the same information as everyone else right on their phone’s text message screen.

Kalil, of the University of Chicago, said text messaging services that provide school readiness tips or other expertise to parents of young children are so inexpensive, they’re easy to offer to any interested parents. Still, she said, program designers must find ways to reach low-income populations who stand to benefit most from the content.

“What would be unfortunate is if only high-income parents responded and in doing so you increased inequality,” she said.

Excerpted from “Helping kids by texting their parents? Here’s what experts say about this exploding strategy.” Read the full article in Chalkbeat.

“Helping kids by texting their parents? Here’s what experts say about this exploding strategy.” was originally published by Chalkbeat, a nonprofit news organization covering public education. Sign up for their newsletters here: ckbe.at/newsletters