My Life is Worth Living: Animated Series Tells Stories of Teenagers Struggling With Thoughts of Suicide [video] 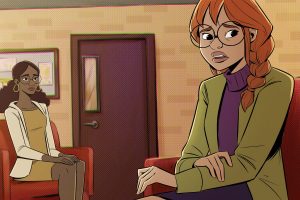 My Life is Worth Living™ is the first animated series that models the human connection shown to be protective against suicide. The series tells stories of characters who face some of the most difficult issues that young people deal with and shows their evolution in the key decision: that life is worth living.

The series tells stories of characters who face some of the most difficult issues that young people deal with today. It shows their evolution in the key decision: that life is worth living.

Today suicide is the second leading cause of death for young people aged 10 to 24. Every day, 500 people in this age group attempt suicide and 20 kids die by suicide.

However, research shows that connections to friends, family and community can be the difference between life and death. The power of storytelling is known to create connection and combat loneliness. Stories can break down the stigma of talking about mental health needs and thoughts of suicide.

Issues tackled in this series

Learn more about the series at mylifeisworthliving.org

Watch the video series on the My Life is Worth Living YouTube Channel.

Source: My Life is Worth Living | mylifeisworthliving.org | Retrieved September 8, 2021