‘Promise Me’ Teaches About Mental Health Through Comics 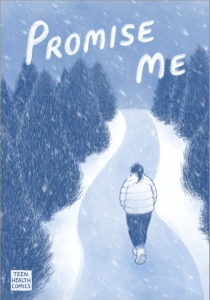 Focusing on depression and suicide prevention, Newton resident Sarah Mausner has coordinated the release of  Promise Me, one of three comic books to educate teenagers about mental health issues through artwork and illustrations.

The comic is a collaborative effort from artists, writers, mental health experts, and young people in the region who have some experiences with depression and suicide, Mausner said.

Mausner said depression and suicide prevention often are difficult topics for adults to talk about with young people, but comics make them more digestible. She said “creation of a little world with the story and the artwork” allows teenagers to “get invested in the characters.”

Kuresse Bolds, an illustrator and graphic designer who did the artwork for Promise Me, said the story illustrates serious topics many adolescents might need to navigate.

He talked about his experiences with depression and said he approached the story with “care” and “tenderness,” because he wanted readers to feel seen.

“Mental health is valid, you don’t need to have a specific reason to go through it,” Bolds said. “It’s very much like an iceberg, you only see a sliver of it, a lot of it is under the surface.”

“Depression and suicide is not a deep, dark secret,” Susan Kooperstein, a public relations specialist in the region who works with local mental health organizations, said. “Those issues need to be talked about in schools and families and community centers.”

She said a “huge educational campaign” is needed to “unveil the mysteries of depression and other mental illnesses.”

“I’ve lost a loved one to suicide,” Kooperstein said. “I would really do anything to prevent loss of young lives and to prevent parents and families from going through the kind of pain that I’ve endured.”

Kooperstein pointed to the importance of resources to educate young people about mental health.

Mausner said a challenge she encountered was “how to get these comics out there” because she said schools generally want evidence-based programs that have undergone evaluations and demonstrated positive outcomes.

Kooperstein said “more could be done” through tools like comic books to reduce a sense of despair among young people.

Partnered with the Society for the Prevention of Teen Suicide, an organization dedicated to increasing awareness and reducing the stigma around suicide through training programs and resources, Teen Health Comics will launch an online program in September.

The Promise Me comic is available at the More Than Words bookstore. More Than Words is a nonprofit providing jobs for young adults who are in the foster care system, court-involved, homeless, or out of school.

Excerpted from “‘Promise Me’ Teaches About Mental Health Through Comics” in The Boston Globe. Real the full article online.