Raising Kids with Dyslexia: Advice from a Mom on a Mission 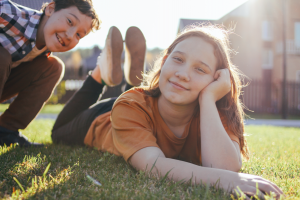 written by Liza Bennigson, Associate Director of Marketing and Communications

When her son, Dylan, was struggling with reading in second grade, Melinda Saunders thought little of it. After all, her older daughter, Alison, had been a late-reader, and Melinda knew every child learns at their own pace.

Dylan’s teachers weren’t overly concerned: he was a good listener who participated in class and had a positive attitude (though it was curious he was having trouble blending sounds). Alison’s teacher admired her thoughtfulness and the fact that she took her time on tests (though was a bit perplexed by her poor spelling). But while expressing her concerns to a friend, Melinda had an “aha” moment. “Those sound an awful lot like my son’s symptoms when we discovered his dyslexia,” said the friend.

Soon thereafter, both Dylan and his sister Alison were assessed for—and diagnosed with—dyslexia. (“We want them to study your brain because your brain is awesome,” their parents explained.) The news, while it did not come as a shock, felt heavy. They had read to their children every night since they were in utero. They thought they were tuned into their kids’ needs and doing everything they could to meet them. How could they not have known sooner? What should they do now?

While the diagnosis and to-do list seemed burdensome at first, it quickly became a call-to-action. Melinda and her husband jumped into response mode. They would do whatever it took to set Dylan and Alison up for success.

Step one was getting the kids on board. “Is it a disease?” Dylan asked, tears in his eyes. Melinda knew then that her words would mean everything. She explained that dyslexia is a difference in the way their brains work and the amazing things they could do as a result. “Walt Disney, Leonardo da Vinci, Albert Einstein, Steven Spielberg…” she added. “They’re all dyslexic, too.”

Once the family had absorbed the news and done enough research to get a sense of what to ask for, the first stop was school. Neither child qualified for special education services at the time.  But even if they had, would the school be equipped to respond? Dylan and Alison were bright, motivated and highly capable students, but their brains required a special kind of teaching to absorb and retain information.

Although they were able to implement 504 accommodation plans for the classroom and had the support of their teachers, Melinda sought services—educational therapists and learning specialists—outside of the classroom. She found an intensive summer program and a skilled clinician to work with them several hours a week for the next three years. “Even now, Dylan meets weekly with his educational therapist to work on expository writing and structured word inquiry, and Alison has a specialized math clinician to make sure her algebra concepts are in place,” she says. “It’s a significant commitment of time and resources that our family has had to navigate along the way.”

Since the day they were diagnosed, Dylan and Alison were assured that dyslexia is a difference and not a disability. But their parents were also candid about the fact that it’s common for some kids to feel bad about themselves or anxious about not learning at the same pace as their peers. Melinda must balance her positive messaging to her kids with the need to demonstrate to the school why they still depend on the limited resources available. “I want them to feel like they’re doing great work, and they are, but I also want to ensure that they still get accommodations. So I have to show the school that they are still struggling,” she explains. She’s honest with them about the dichotomy and tries to teach them to advocate for themselves.

When asked to do a brief presentation to their School Board about the needs of dyslexic students, Dylan and Alison decided to create a stop-motion animation short film that has since been viewed nearly 3,000 times on YouTube. It turned out to be a perfect showcasing of the skills and talents that so many individuals with learning differences possess. “They often find alternative ways of gathering knowledge and innovative strategies to learn, work, and achieve in life.” (Yale Center for Dyslexia & Creativity 2016).

As her own confidence in the process grew, Melinda noticed a shroud of secrecy surrounding the special education resources at school. It made sense: privacy laws prohibit schools from sharing names of other families seeking services. But it inadvertently created a feeling of inadequacy, stigma and isolation. Melinda remembers how liberated she felt the first time she attended a free Community Education class at CHC for parents of children with dyslexia. She had found her people. They could talk openly about their children’s challenges and successes without judgment. They could share best practices, coping strategies and support. Maybe they could even just arrange a cup of coffee with someone who would understand.

Melinda helped start a monthly Dyslexia Support Group for parents and educators on the peninsula. She joined CHC’s Parent Outreach Team as a school liaison. She has taken 375 hours of coursework on how to teach math to dyslexics in a way they comprehend. This has allowed her to challenge her own brain, help her kids with homework, and tutor other students with dyslexia who are struggling in math. Self-care isn’t something Melinda has much time for. But her calendar, abound with opportunities to advocate, educate and inspire, fills her with energy, strength and purpose. “What would I do,” she wonders with a smile, “if my kids weren’t dyslexic?”

It’s a family affair. Melinda regularly brings her husband and children to inspiring speakers like Jonathan Mooney and events like EdRev. “It’s important for them to see and hear from people just like them who are successful and happy, not in spite of but because of their differences,” she says.

The five years since the kids were diagnosed has been a whirlwind. “I only wish I had had them tested sooner,” says Melinda. According to the International Dyslexia Association, early identification and treatment is the key to helping individuals with dyslexia achieve in school and in life. In 2017, a new set of Dyslexia Guidelines was adopted by the state of California. “We have learned how to identify people with dyslexia at a very early age and later in life. And we have learned that early identification and intervention is very important,” said Tom Torlakson, former State Superintendent of Public Instruction.

Schools are responding. For the first time ever, Palo Alto Unified School District (PAUSD) screened more than 2,000 first through third graders for dyslexia this fall, of whom 25 percent were flagged as at risk for dyslexia. Teachers are receiving more training on how to identify and teach children who learn differently. And overall there is a growing awareness, increased understanding and reduced stigma.

The good news is that there are countless resources out there for parents of kids with learning differences. The challenge is knowing where to start and not feeling overwhelmed. “It’s a marathon, not a sprint,” advises Melinda.

She likens parenting a child with a learning difference to having a newborn, in terms of the constant shift in needs and challenges. Just when you think you have things figured out, they change. To adapt, Melinda suggests joining a local support group of people who understand, and learning as much as you possibly can. “Being proactive is going to get you really far,” she says. “If you’re putting attention to it, it’s going to get better. Sometimes it’s hard to see that. But we’re going to be able to help them. With our support, they’re going to be OK.”

Liza Bennigson is the Associate Director of Marketing and Communications at CHC, providing education and mental health services for children, teens and young adults.