Computerized Screening May Help Identify Youth at Risk for Suicide 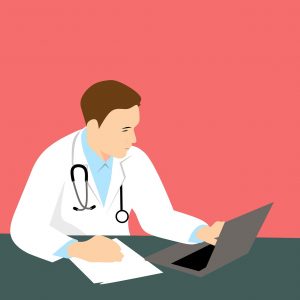 Suicide rates for adolescents have risen over the past two decades. In 2019, nearly 1,600 adolescents between the ages of 12 and 17 died by suicide. Only about 40% of adolescents who die by suicide have been treated for a mental health concern. To help ensure that at-risk youth receive help, it is important to screen broadly for suicide risk.

Emergency departments are a common place where youth access emergency care. This makes it is an optimal place to implement universal screening for suicide risk. But emergency rooms face many challenges to screening, including lack of time and budgetary restrictions. A tool that could quickly and accurately identify suicide risk would help providers implement universal screening in these settings.

A team of scientists led by Dr. Cheryl A. King at the University of Michigan, Ann Arbor developed a computerized suicide screener. The screener, called the computerized adaptive screen for suicidal youth (CASSY), asks a series of questions—11 on average—and takes between 1 to 2 minutes to complete.

In collaboration with emergency departments across the U.S., the team recruited youth between the ages of 12 and 17 to help develop and test the screener. The study was funded in part by NIH’S National Institute of Mental Health (NIMH). Results were published on February 3, 2021 in JAMA Psychiatry.

In the first phase of the study, youth who were admitted to an emergency department at the study sites were randomly selected to complete self-report questionnaires (92 main questions and up to 27 additional questions). More than 2,000 youth answered questions on a computer tablet. Questions assessed factors related to suicide risk, including suicidal thoughts; history of suicide attempts; self-injury; depression; hopelessness; alcohol and drug misuse; family, school, and social connectedness; and physical and sexual abuse.

The youth and their parents then received follow-up calls three months after this initial screening to learn if the youth had tried to end their life in the intervening months. The researchers used these data to create the CASSY. They found that using 11 items from the questionnaires could provide nearly the same predictive value as 72 of the questions.

In the second phase of the study, the team tested the ability of CASSY to predict suicide risk in a new set of more than 2,700 youth, aged 12 to17, at 15 emergency departments. Youth completed the CASSY. Similar to phase 1, families were contacted three months later to learn whether the youth had tried to end their life.

In this second phase of the study, 6% of participants attempted suicide in the three months between initial screening and follow-up. CASSY correctly identified 82% of the youth who had attempted suicide.

“No young person should die by suicide, which is why we have made bending the curve in suicide rates a priority area of research for our institute,” says Dr. Joshua A. Gordon, director of NIMH. “The CASSY screener represents an important advance in identifying those adolescents who are at risk for suicide, so they can be connected with the critical support services they need.”