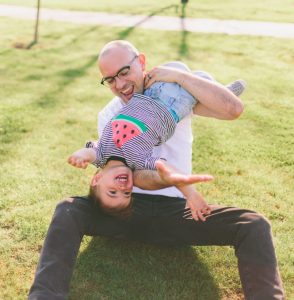 Stereotypical gendered parenting differences remain entrenched in American households. In some cases parents may simply be unaware that they are parenting daughters in ways that are different from sons. Things are changing slowly, but gender stereotypes are still entrenched in parenting practices.

Dr. Erika Lunkenheimer, Associate Professor of Psychology and Director of the Parent-Child Dynamics Lab at Penn State University says “As our society begins to increasingly accept gender as a social construction as opposed to a biological characteristic, more parents may become aware of how child gender influences their parenting.”

As with so many aspects of parenting, going beyond prescriptive advice to examine our own beliefs and motivations tends to unlock insights that help us become better parents.

The way parents talk about objects changes depending on the gender of the child they are talking to according to a study published in a 2017 issue of Psychological Science by Dr. Shannon Pruden and Dr. Susan Levine. After observing a diverse sample of 58 families in their homes, the researchers found that parents use more dimensional adjectives, shape terms, and words describing spatial features and properties with boys than with girls. So, for example, parents are more likely to describe a ball as “a little circle with curved edges” to sons than they are to girls.

The analysis showed that this kind of talk mattered, developmentally. Gender differences in toddlers’ spatial talk was tied to their parents’ earlier spatial-language use when they were 14 to 26 months old.

Parents Are More Likely to Roughhouse With Boys

In 2017, a group of researchers led by Dr. Jennifer Mascaro published their findings of paternal behavior related to brain responses to male and female children. As part of a more extensive study on paternal caregiving, 69 heterosexual, biological, cohabitating fathers (one-third of were non-white) were observed playing with children age 1 or 2. The research published in the journal Behavioral Neuroscience found that parents are more likely to engage in roughhousing or rough and tumble play (RTP) with their sons more than their daughters.

Surprisingly, the researchers think that the underlying reason parents roughhouse with their boys is more about helping them build emotional intelligence than training them for brute physical domination. “RTP involves dynamic and forceful behaviors, such as tickling, poking, and tumbling, which would be hostile in many circumstances and which can only be interpreted as play given the particular social context,” the researchers conclude. “For this reason, it is thought to both require and entrain emotion regulation and empathy.”

The Toys in Boys’ Bedrooms Conform to Gender Norms

How parents play differs between sons and daughters, but so do the toys parents give their kids to play with. In 2018, Dr. David MacPhee cataloged toys available in 75 U.S. preschoolers’ rooms. His research, published in the June 2019 edition of the journal Sex Roles, found significant gender differences in what toys parents made available to boys and girls.

MacPhee found that boys’ rooms had 15 times more action figures than girls’ rooms, as well as significantly more outer-space toys and props for dramatic play that involved guns, tools, and machines. Over the nearly five decades between studies, sports equipment was one of the few toy categories where the gap between what was present in kids’ bedrooms narrowed significantly.

“Parents’ beliefs and attributions about their children tend to carry weight in how they approach parenting,” says Dr. Lukenheimer. “I imagine their awareness of their own beliefs varies a great deal: many parents openly encourage boys and girls to act in a way that aligns with gender stereotypes, and this approach is often reinforced by media and advertisements that uphold such stereotypes.”

Excerpted from “Boys Still Get These Three Things From Their Parents That Girls Don’t” in Fatherly. Read the full article online.

Source: Fatherly  | Boys Still Get These Three Things From Their Parents That Girls Don’t, https://www.fatherly.com/parenting/things-boys-get-from-parents | ©2021 Fatherly