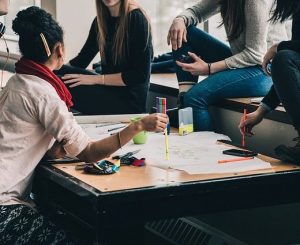 Mental-health problems among college students have been climbing since the 1990s, according to the American Psychological Association. And with services increasingly stretched at campus health centers, students have been taking action themselves through peer-run mental-health clubs and organizations. The approach appears to be paying off, a new study finds.

In what they describe as the largest study of its kind, researchers found that across 12 California colleges, such student-run efforts were associated with increased awareness of mental-health issues, reduced stigma and a rise in “helping behaviors.”

“Student-organized activities can improve college student mental-health attitudes and play an important role in improving the campus climate with respect to mental health,” said Bradley Stein, a senior physician policy researcher at the Rand Corp. and one of the paper’s lead authors.

The study, published Wednesday in the Journal of the American Academy of Child & Adolescent Psychiatry, was based on an online survey that asked questions about mental-health awareness and familiarity with Active Minds. The national organization supports student-run mental-health clubs on college campuses. It recently began working at the high school level and now has about 50 high school chapters among its more than 450 groups.

The survey, conducted three times during the 2016-2017 academic year, asked students about their familiarity with Active Minds as well as their attitudes about mental health and experiences with psychological difficulties, either their own or those of others. More than 1,100 students at the California colleges and universities participated.

By the end of the academic year, the results for the low and moderate groups showed that increased familiarity with Active Minds was associated not only with increased knowledge but decreased stigma and, perhaps most critically, a greater likelihood of helping another student in a mental-health crisis.

Read the full article in The Washington Post online.